Last week, Moo Kitty aka Bella, was sent on her way back to Catskill, NY. She came down to Florida with us as a standing cat and is going back to NY as a Cow.

Bella is part of an outdoor exhibit called Cat’n Around Catskill, which consists of fiberglass cat sculptures that will be on display this summer on Main Street in Catskill, NY. Artists submit designs and then they are “juried” by sponsors who pay to sponsor a design. The artist receives the corresponding cat (either standing or sitting) and they take it back to their studios to convert it to the design that was submitted

My “Moo Kitty” design is the standing cat converted to a Holstein cow. It took me several weeks to sculpt the cow parts and then paint it.

Here are photos with after and some of the “before.”

I still have to add udders, a collar and cow bell and eyelashes. Then I have to tweak and sand it. I am trying to keep the sanding to a minimum. The Magic Sculpt dries like concrete. It’s amazing stuff.

I tweaked my original design by sculpting the entire cat instead of adding props like a leather collar, because I need to make the cow vandal proof. I also want the finished piece to still reflect the cat underneath so I am adding to the cat without taking the personality away.

A Catskill Cat. Every year Catskill, NY had about 50 cats on display that are fiberglass molds that artists convert to all sorts of amazing cat art.

My Cow Kitty design was selected and I am in the process of converting this cat into a cow. As you can see, I am still working out of the garage for now. I can’t wait for my permanent studio.

June was a full month preparing for my sketch club’s show, Arts on Terry, Father’s Day, etc and it all ended today.

This weekend was the reception “It takes a Village”, where two of my sketches were juried into that show, held at Roast Coffee and Tea House, (a PAC sponsored venue) in Patchogue. Several sketchers have pieces in the show and it looked great!

Here is my sketch of Mademoiselle Patisserie, one of the two. I did a smaller sketch with a cat back in the beginning of June, this one is approx 6×9, minus the kitty. 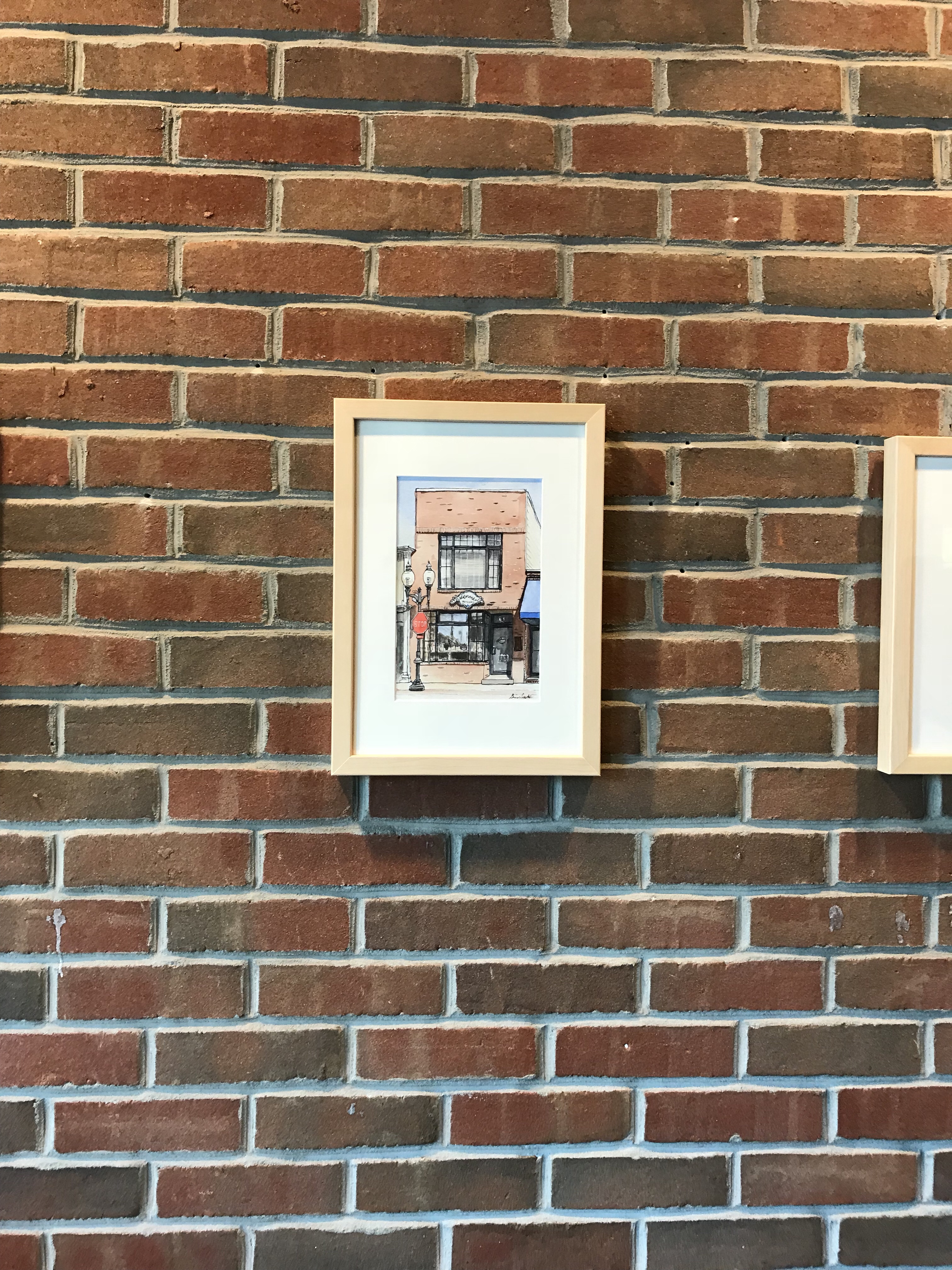 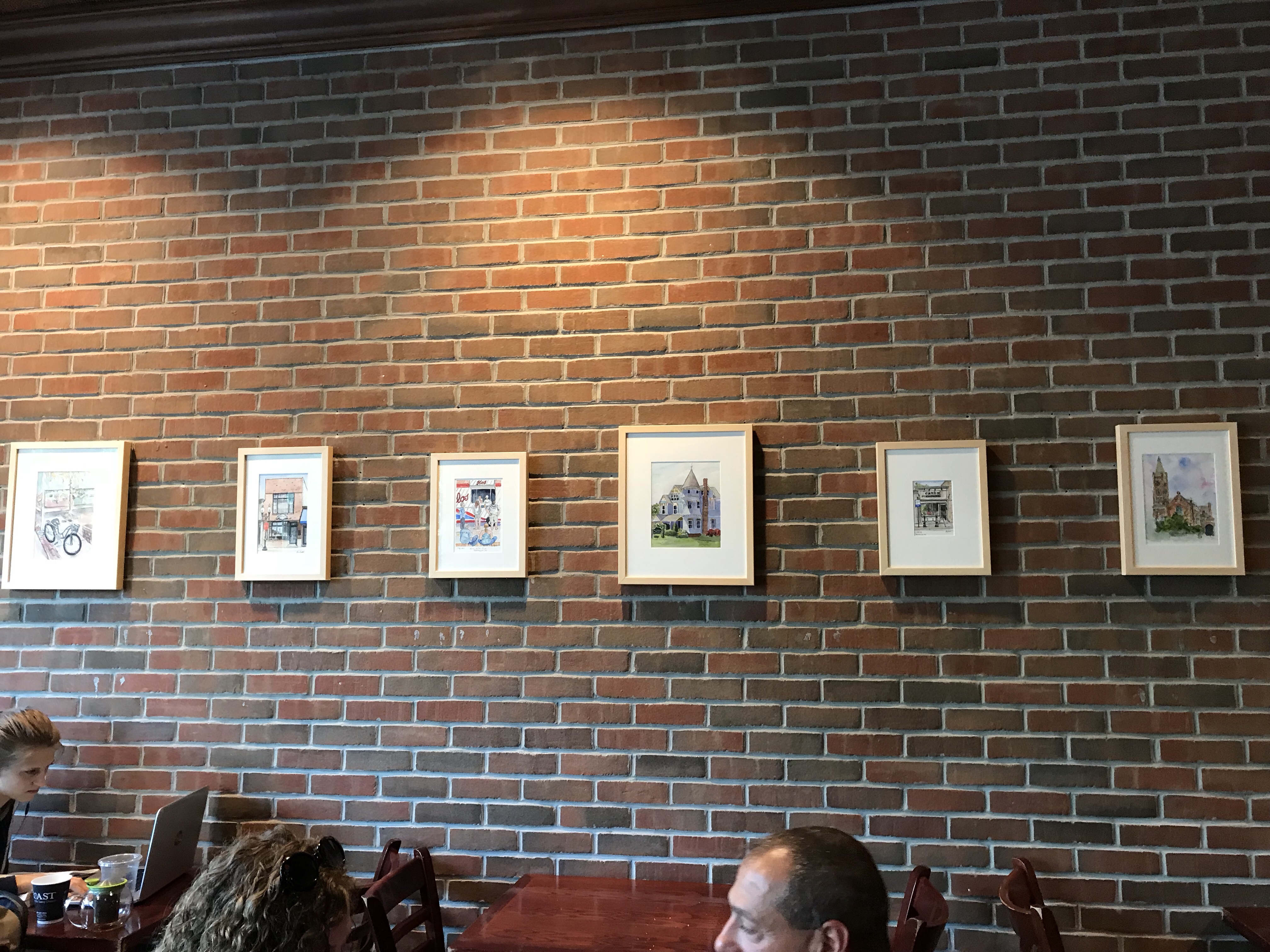 Another show that went up last week is PAC’s juried member show, “Patchworks,” where my submission, “Nod to O’Keeffe” was accepted into that show as well.

This is an abstract sketchbook that I worked on in between everything else. The idea grew from a smaller project and I just kept going with it until I had a full piece. I was really excited about it getting accepted. 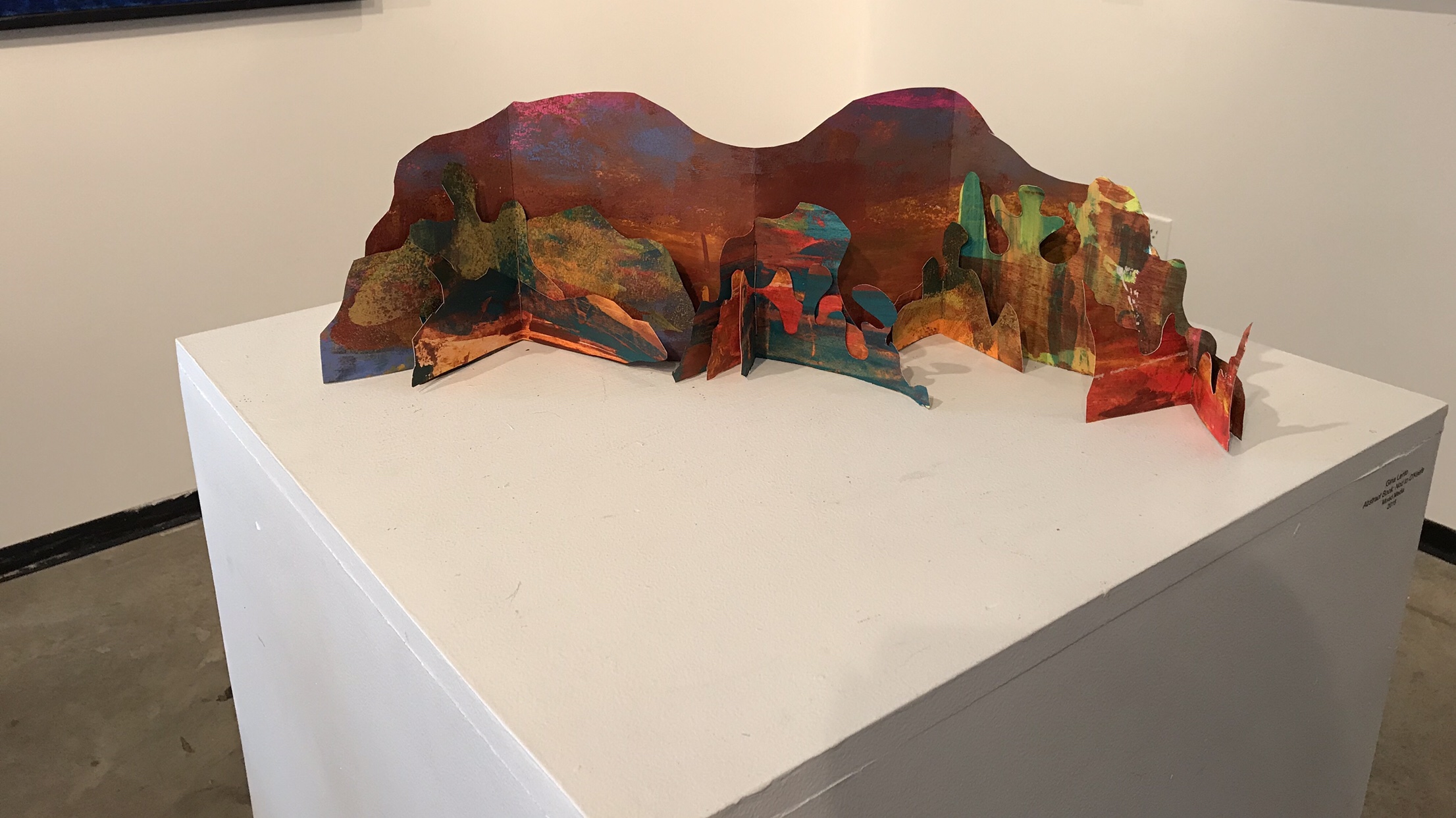 Also ending today is my weekly doodle page for the week. 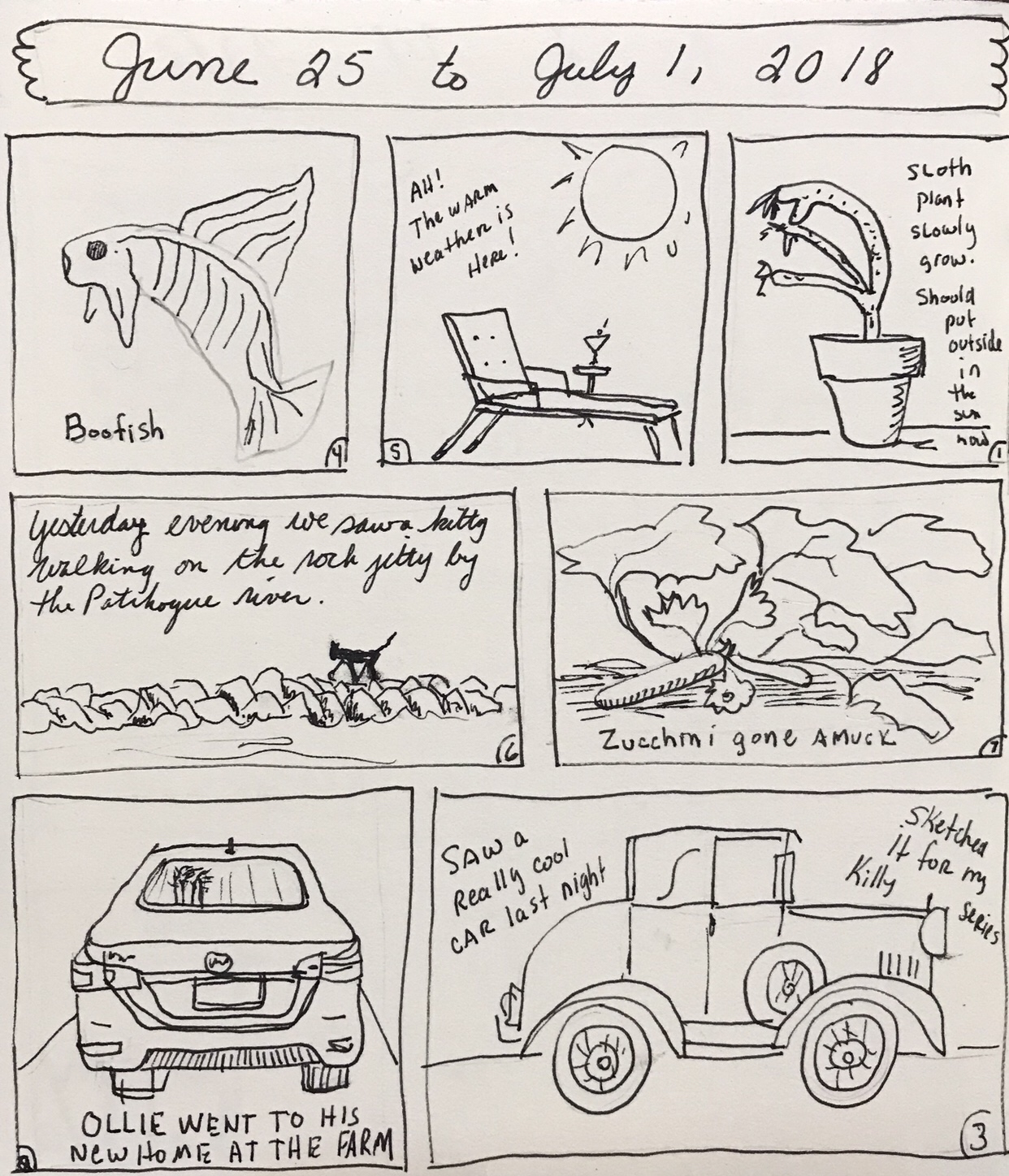 Lastly, today’s postcard, inspired by a kitty John and I saw on Friday. He was out on a hunting expedition on a rock jetty. He went all the way out until he found some goodies. This is him on the way back….we couldn’t believe he went all the way out. The seagulls all left when they saw him coming. 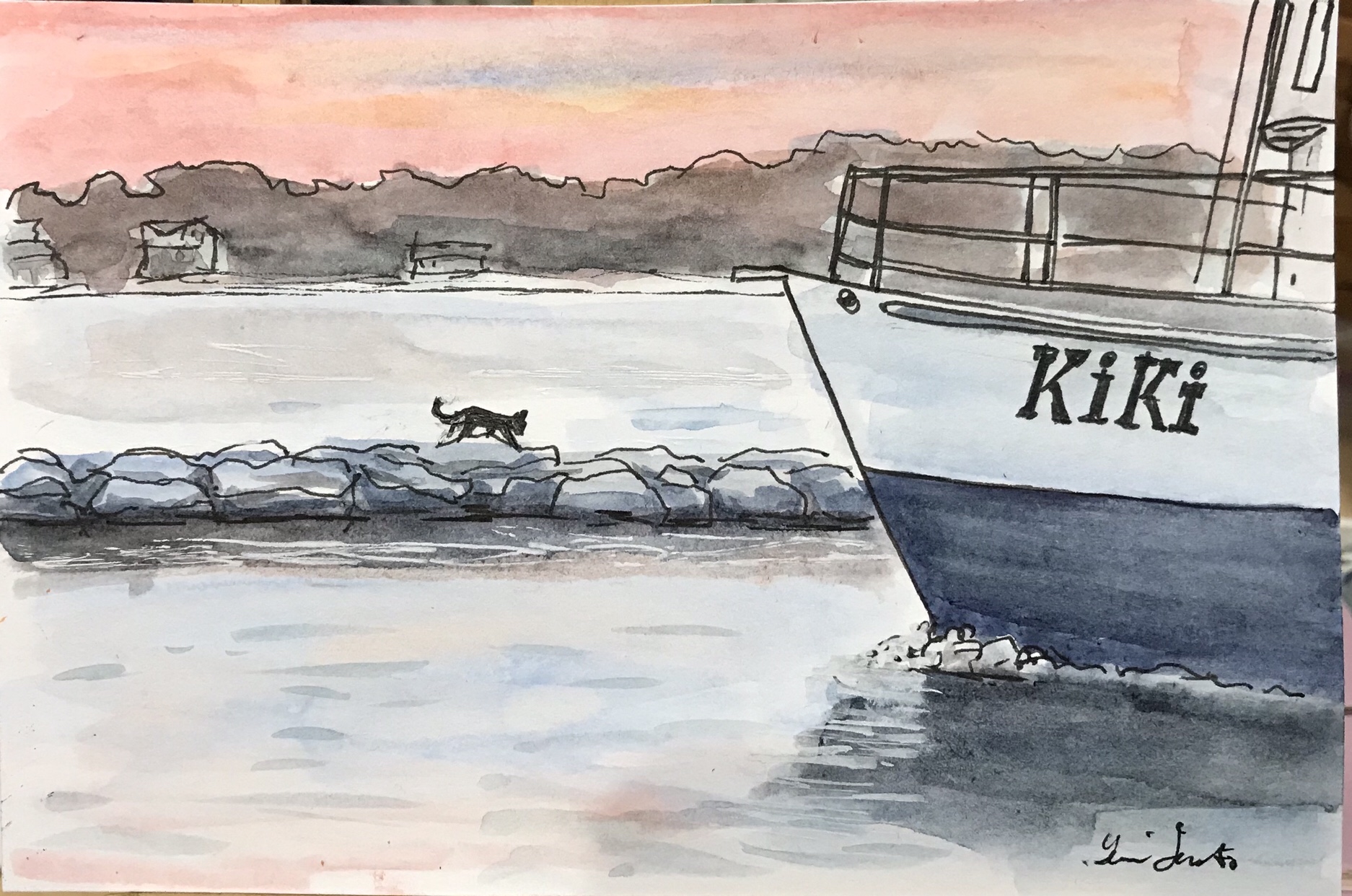 John and I don’t get to the Eastern part of Long Island too much, although I occasionally teach classes at the art school in Riverhead.  Riverhead is another town on Long Island that is doing that slow crawl of revival.  It’s a nice place to visit and sketch.

They do a street fair similar to Patchogue’s Alive After Five and they call theirs Alive on 25, which is the number of the NY state highway that Riverhead calls their Main Street.

New York is dotted with hamlets and villages along state routes and I highly recommend going out of the way to find them.  They are places to sketch.

Last evening, at Alive on 25, there was a model arranged for us to sketch.  There was also an antique car show that I would have loved to sketch instead, but we were already committed to sketching the model.  Oh well, maybe another time.

Below there are two sketches of the model, I did more but I liked these two the best.  I also did a “rogue” sketch of the sculpture on the grounds of the East End Arts complex….I say “rogue” because I took a lot of liberties with this sketch and just had fun with it. 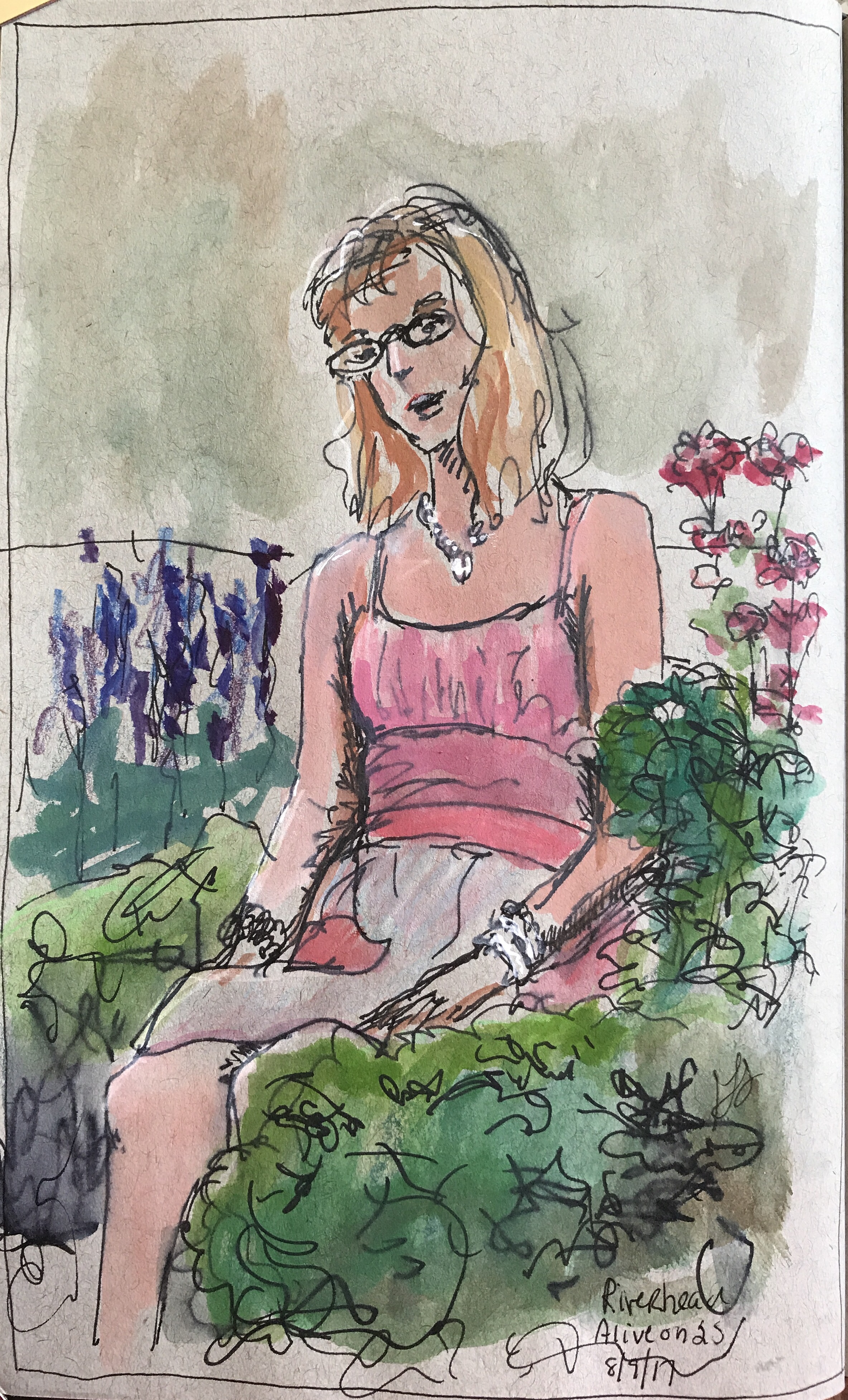 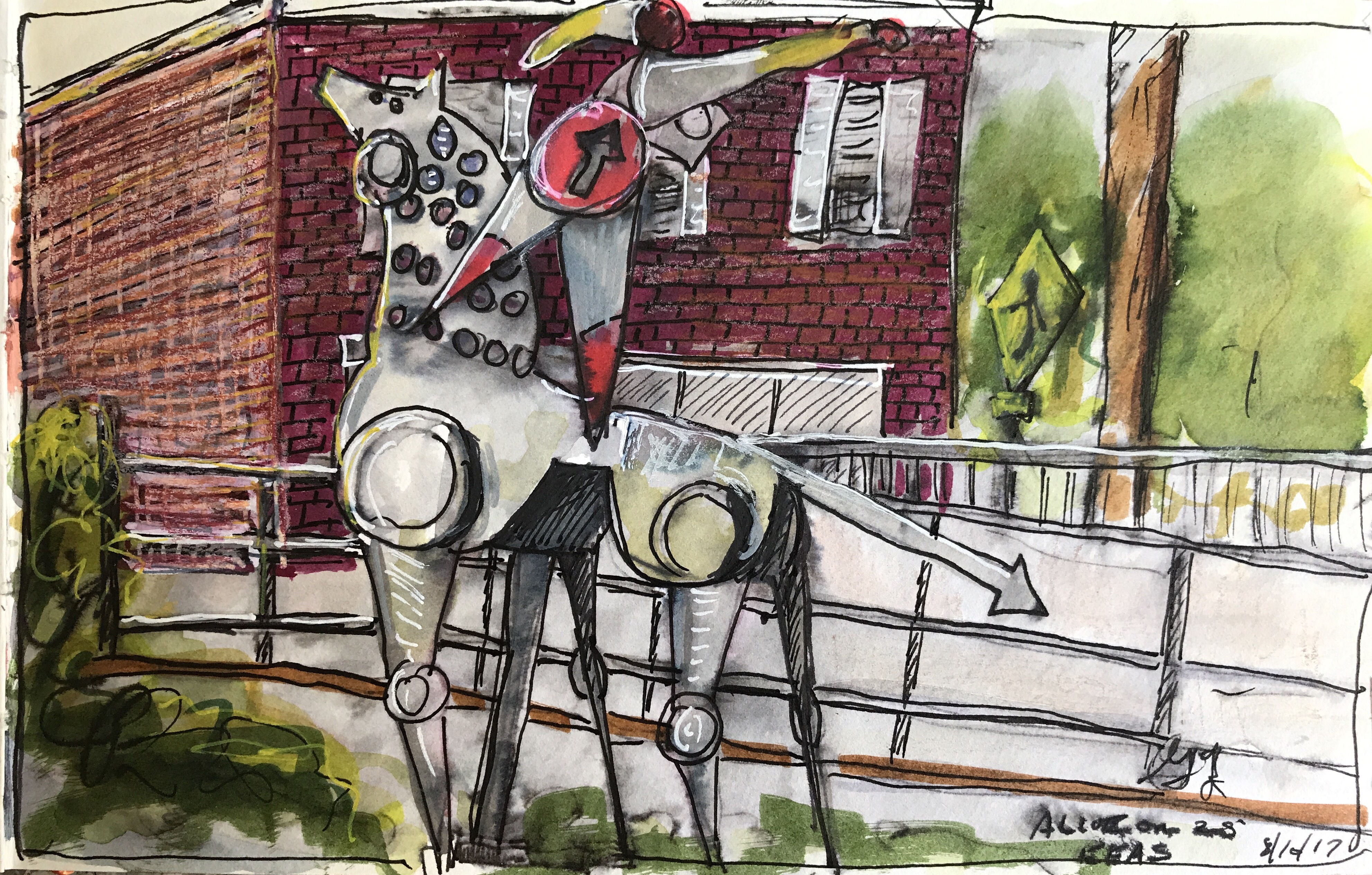 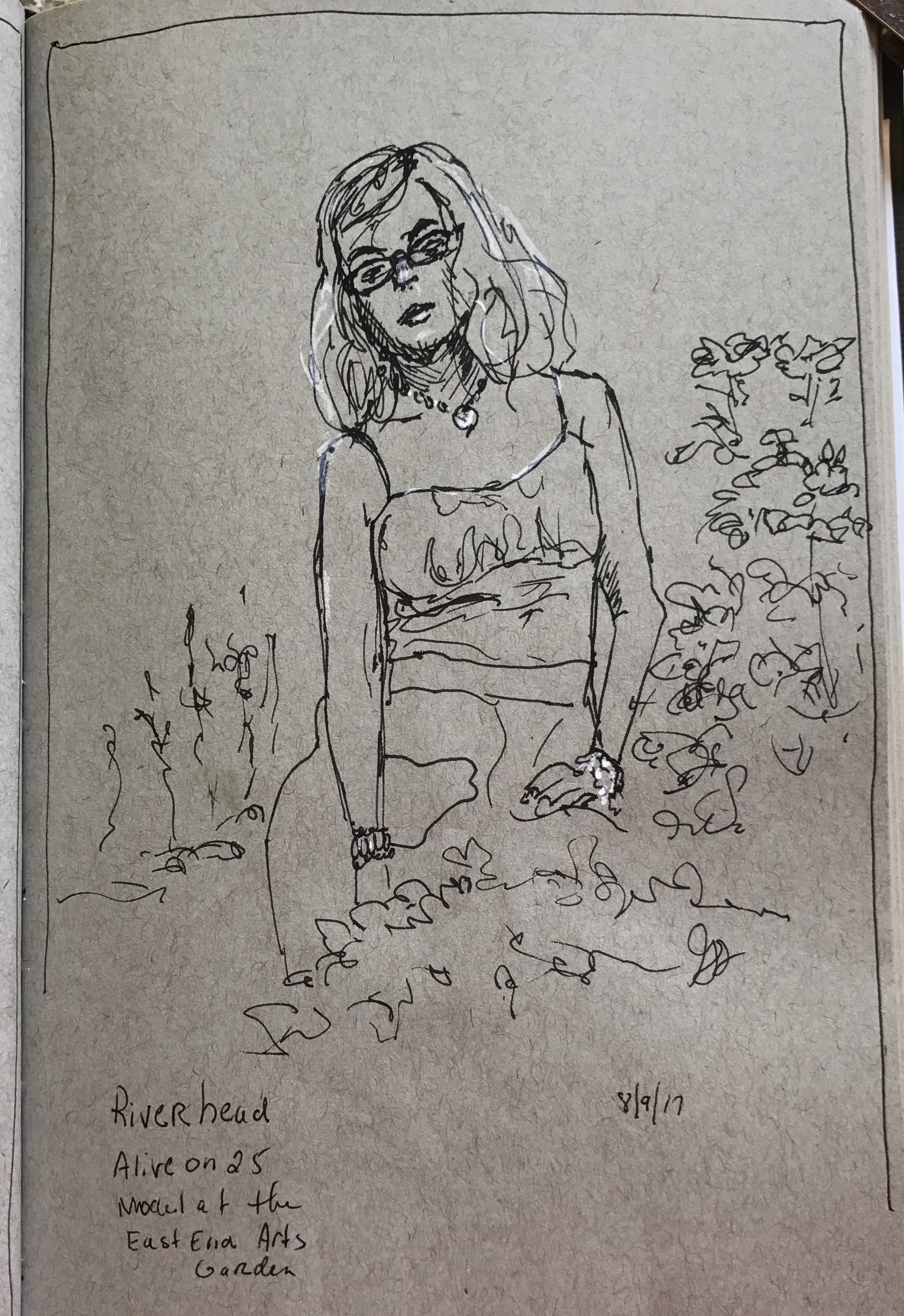 The sketch subject below is on Congress Pkwy just East of Michigan Ave.  This sculpture is beautiful.  It is designed as a trellis for vines so that her skirt will fill out with plant life…so far, she just has a few leaves. 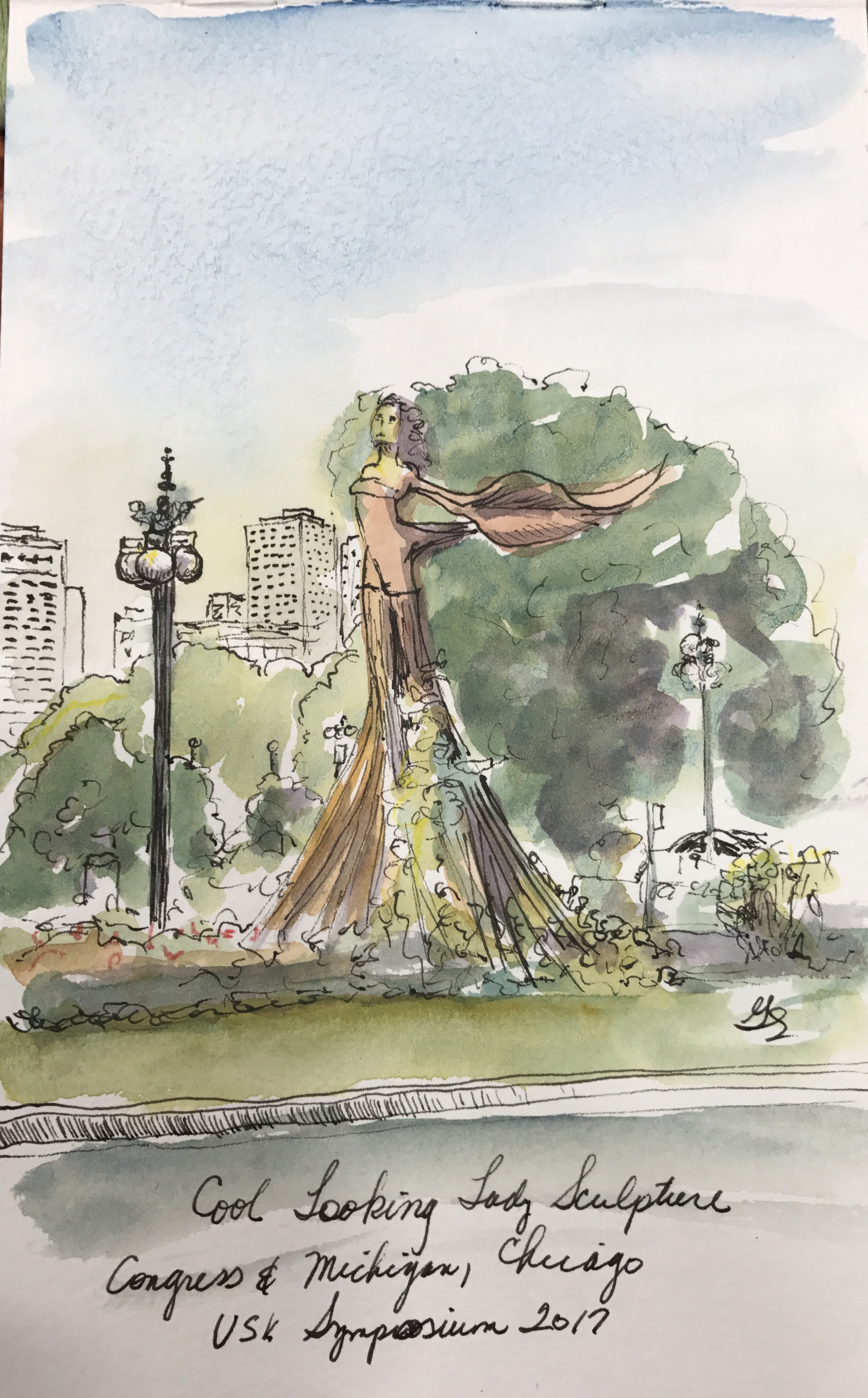 I moved on to the Plaza where the native American sculpture was holding court.   My friends were focused on his “six pack” butt. 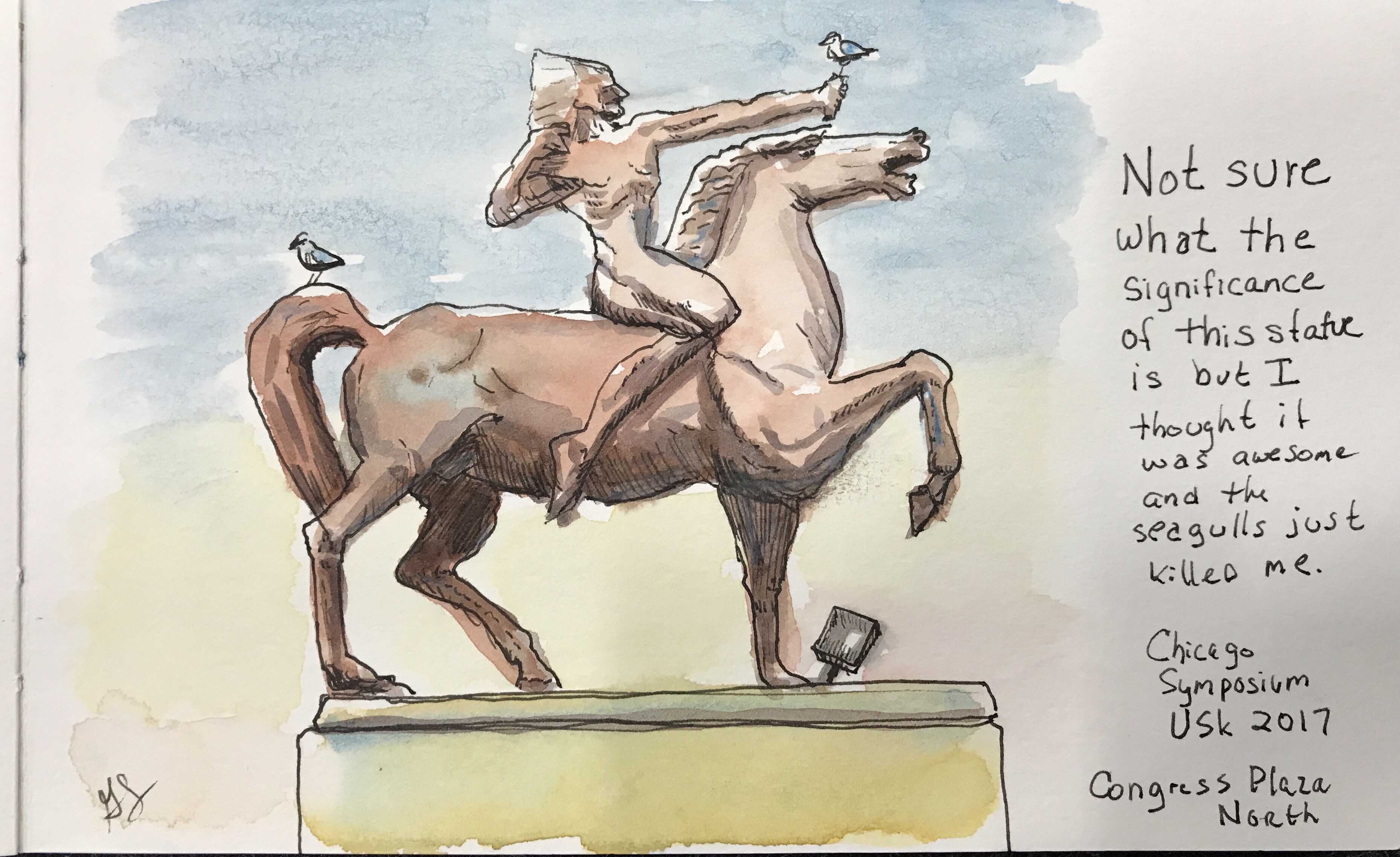 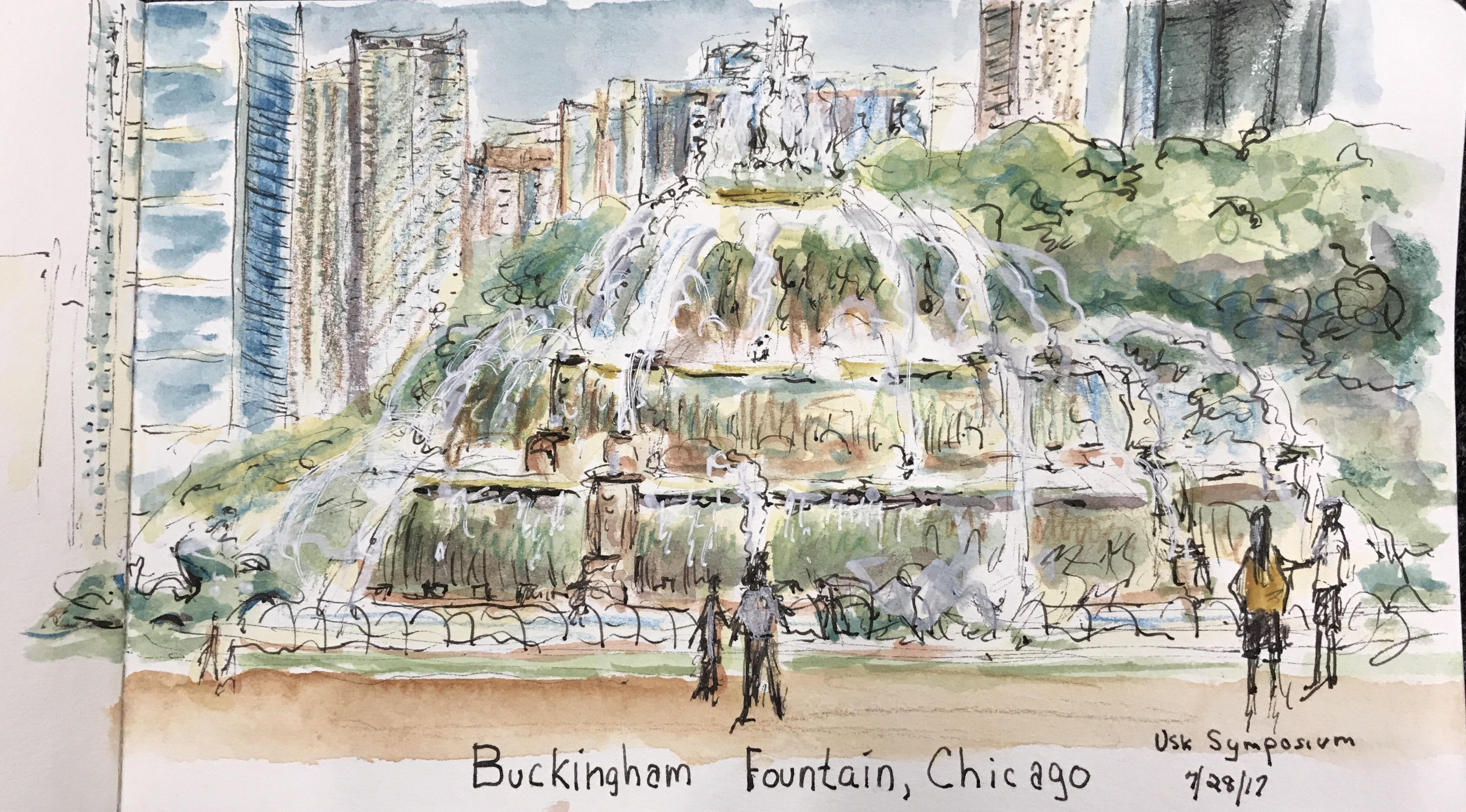 The London House…..in Chicago……oookay.  I had to rush through the end of this one because I had run out of time…. 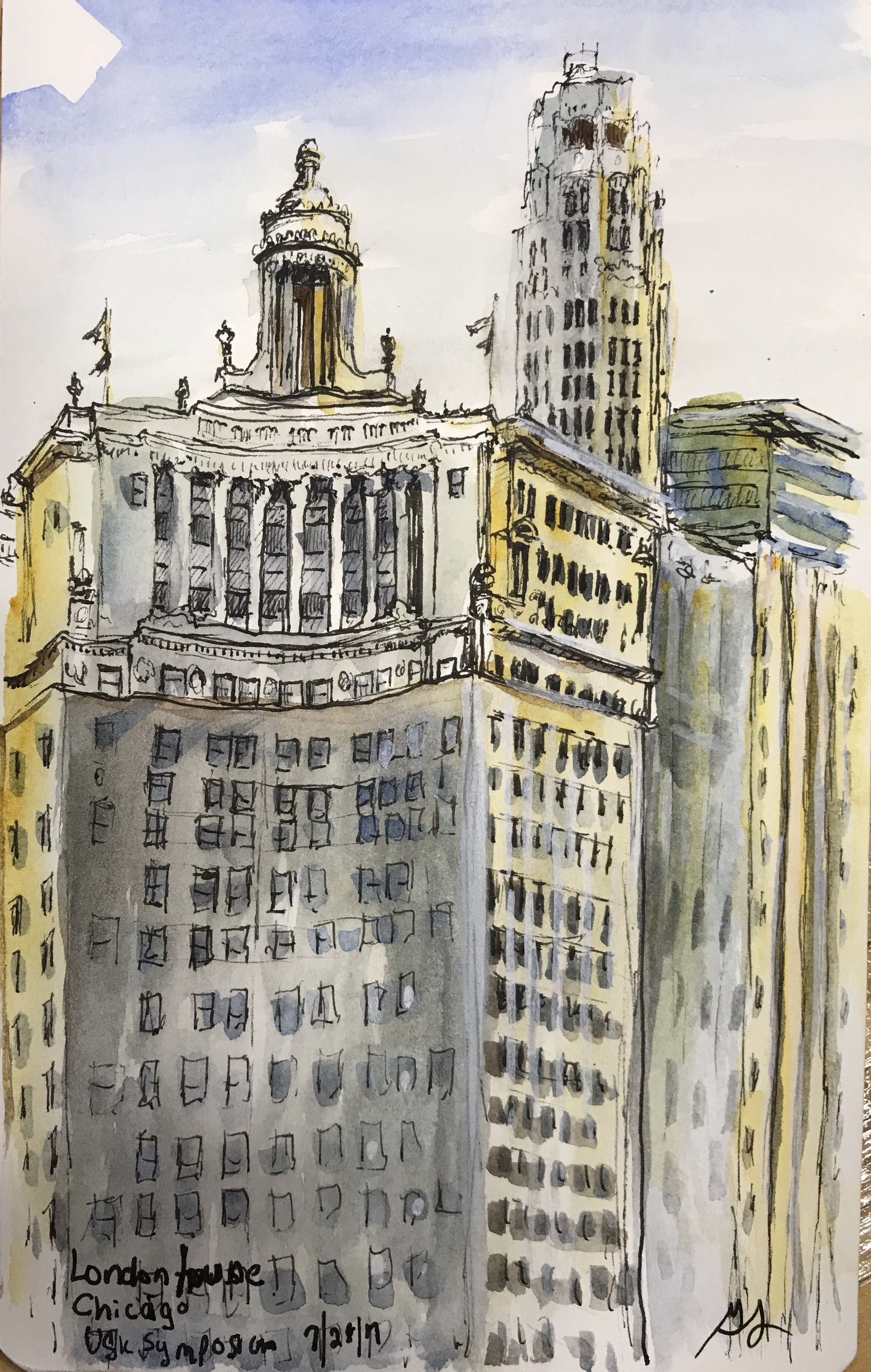 Not a sketch tonight, more of a sculpture… made this chair for my husband’s 60th birthday. It took more time to find the parts than it did to make the chair. I might have to use this chair as a prop for sketch night!  The chair is even  more awesome in person…. 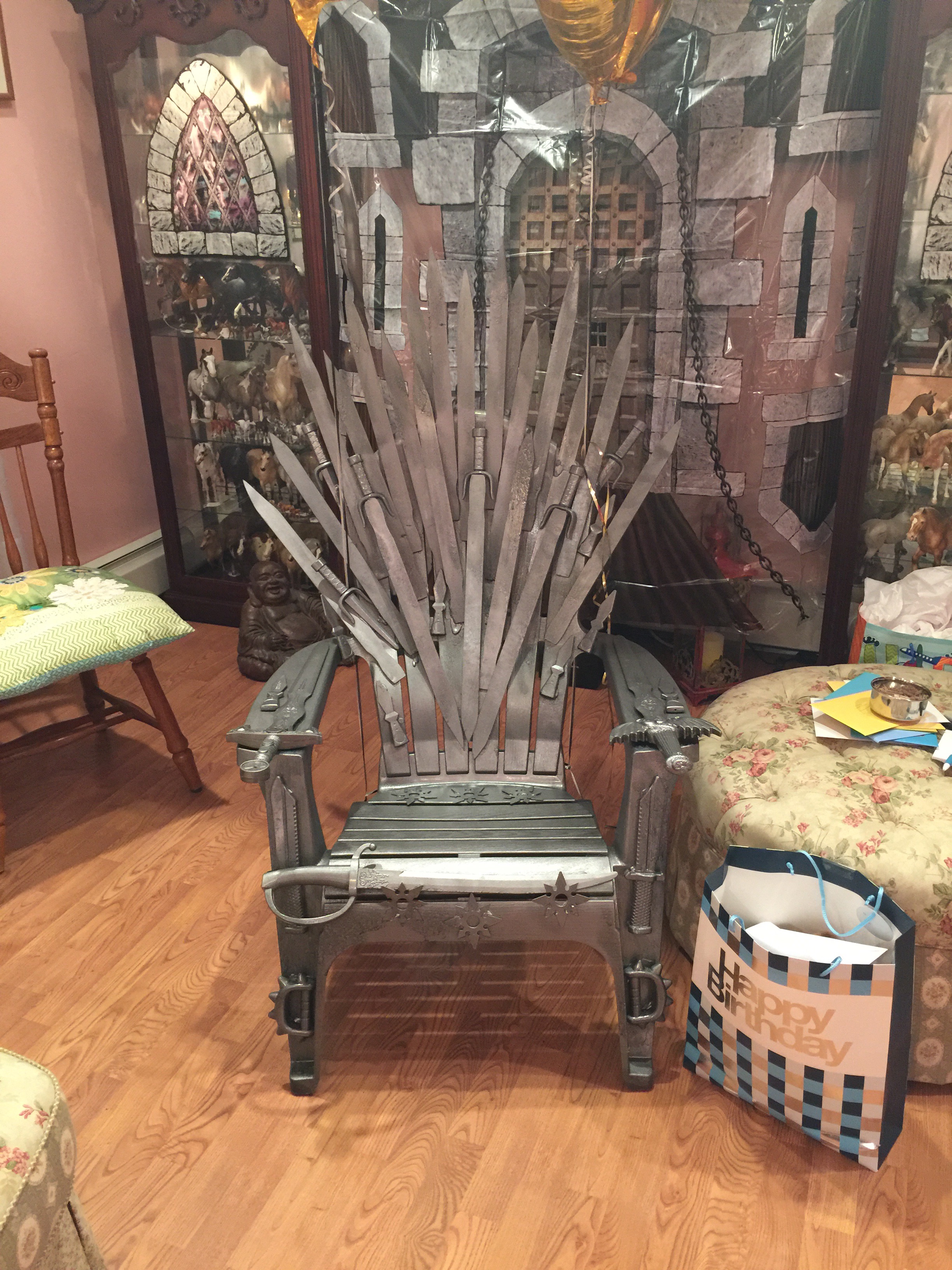 Here it is right after we did it…. 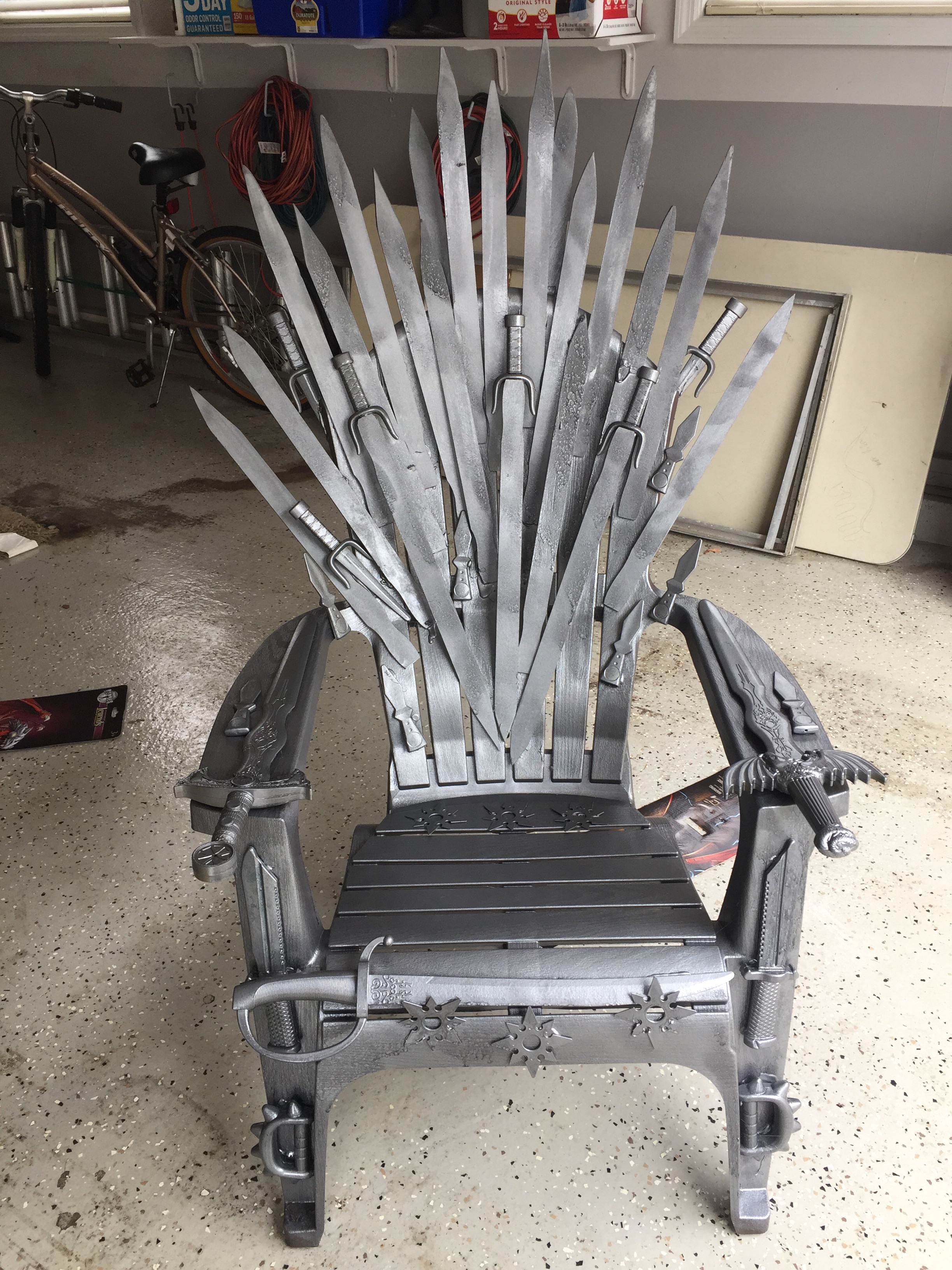